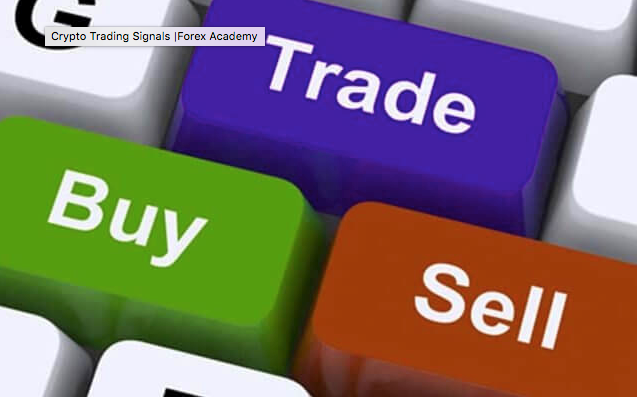 Bitcoin is currently trading at $48k after yet another lackluster day in the markets. The largest cryptocurrency by market capitalization has been stuck in the narrow trading range of $47k-$49k for many days now and it looks like it is here to stay till either the bulls or the bears can make a decisive move. Altcoins on the other hand reported slight losses overall apart from a few usual exceptions. More on that later on.

In other news, a historically accurate Bitcoin trading signal is now flashing green. It joins a list of recent trading indicators that have turned bullish. However, there has been no reaction from the bulls at the moment. More on that later on.

In other news, former US Securities and Exchange Commission (SEC) chair Jay Clayton has stated that he is a fan of the crypto technology sector. He also stated that the SEC should only regulate the digital assets that fall under its purview and according to him, many of them don't including the stablecoins that are just digital currencies pegged to the USD itself. However, Clayton has stated that the digital currencies should be brought under regulation and only those who are willing to work within the current system in place. That is a tough ask for a sector that is very disruptive and permanently changing the legacy financial system of today.

A district court in Beijing has rejected a plaintiff’s appeal to get damages in Bitcoin. The complainant had stated that he had invested in a Bitcoin mining facility in Chaoyang but he only got limited returns from it and the company he invested in should be held responsible and they should pay in Bitcoin. The court rejected his appeal and also asked local authorities to look into any possible illegal mining in the region. China has a blanket ban on crypto mining and usage throughout the country. But, historically, the country was home to one of the biggest mining companies in the world but it all changed earlier this year when the country stopped looking the other way and ordered all miners out of the country.

The National Bank of Kazakhstan (NBK) has stated that it will release a comprehensive report on digital currencies by July 2022 and then use it to launch a Central Bank Digital Currency (CBDC) by the end of the year. The country is home to some of the biggest Bitcoin mining activity in the world but it is now looking to launch its own CBDC to provide some competition to the advent of digital currencies.

The International Monetary Fund (IMF) Chief Economist Gita Gopinath has called for a global response to regulating cryptocurrencies instead of banning it completely. Gopinath will soon take charge as the Deputy Managing Director of the IMF. She believes that banning it will simply be not practical as most crypto exchanges are offshore-based and do not fall under the jurisdiction of any country.

Bitcoin is still stuck at around $48k at press time after yet another slow, slightly bearish day at the office. The cryptocurrency looked promising last night but it didn’t move above $50k and thus came crashing back down to where it had started in no time.

The last 24 hours started with Bitcoin at around $49k. It immediately rose slightly and got to as high as $49.5k at one point but couldn’t proceed further. It then proceeded to trade sideways for a long while till around 3:30 PM in the evening. That is when the exhausted bulls made way for the short-term bears who slowly brought the index below $48k. At press time, the index is right around the $48k mark.

Going forward, Bitcoin is seeing bullish trading signals a lot these days but no actual on-ground price action. This is why the price is considered the ultimate metric and not all these analytics coming out. The equation for the bulls is the same right now; make a move above $50k convincingly and try and revive the bull run. For the bears, it is much easier; keep things below $50k and then wait for an opportunity to go further down.

The total market capitalization of Bitcoin was around $907 billion and its share of the proceedings was 40.81%.

Other cryptocurrencies aka altcoins posted slight losses during the last 24 hours apart from a few exceptions who rose instead. Solana (SOL, 4%) and Terra (LUNA, 6%) were among the gainers. The rest of the major altcoins posted losses anywhere between -0.2% and -5%.

According to a popular crypto analyst, a historically accurate crypto indicator is flashing green once again. The Momentum Indicator as it is called is part of a long list of trading signals that have turned green in the last few weeks.

According to Matthew Hyland, a popular trader who tweets by the handle of Parabolic Matt:

#Bitcoin has broken out of the multi-month down trend on the Momentum Indicator (One Day Time Frame)!!!

The previous two times it broke out of a multi-month downtrend this year, a massive bullish move followed: 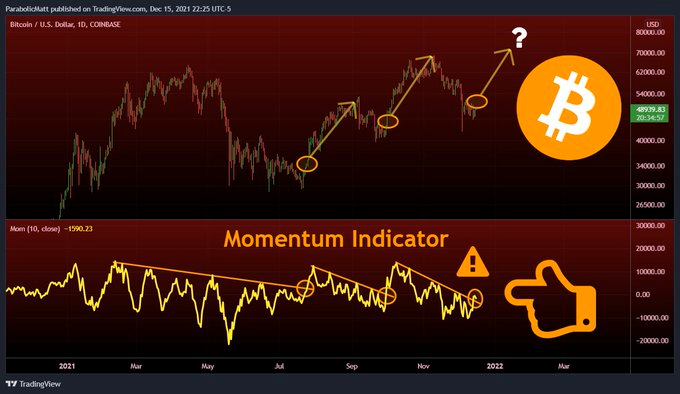 So, according to the graph, the indicator has proven itself twice in the last calendar year alone, leading upticks in August and October. Now it is flashing green once again.

However, despite the recent green signals, Bitcoin is still stuck in a narrow bearish territory and is refusing to come out of it. Perhaps the indicators need to pile themselves up before the bulls will take a notice but it is clear that the current trend isn’t changing at the moment and will take some monumental effort to change the status quo.